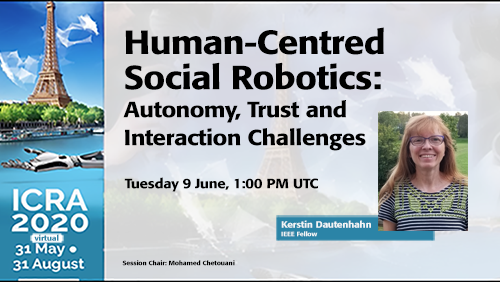 Your player may be in pause and your sound muted when you arrive.  Please click play on the video and un-mute to join the workshop LIVE.

Social robots that interact with people have been studied extensively over the past 20 years. Such research requires interdisciplinary approaches that cover areas such as engineering, robotics, computer science, as well as psychology, social sciences and other fields. I have been involved in multiple projects over the past 25 years aimed at developing social robots that can interact “naturally” with people, i.e. meeting people’s expectations on what it means to interact with a robotic “social entity”. This involved fundamental research, as well as application-oriented research. I’m particularly interested in application areas where robots are not replacing people, can be used as efficient tools complementing the human skills and providing an “added value”. These application areas include therapy and education for children and adults, as well as support and assistance for older people who live in their own homes or in care homes. In my keynote talk I will briefly introduce some issues that are key in those domains, in particular with respect to robot autonomy, people’s trust (and the danger of overtrust) in robots, and challenges in how to create useful, enjoyable, safe and non-judgemental interactions between people and robots.

Professor Dr Kerstin Dautenhahn is Canada 150 Research Chair in Intelligent Robotics at University of Waterloo in Ontario, Canada. She has a joint appointment with the Departments of Electrical and Computer Engineering and Systems Design Engineering and is cross-appointed with the David R. Cheriton School of Computer Science at University of Waterloo. In Waterloo she is director of Social and Intelligent Robotics Research Laboratory (SIRRL). The main areas of her research are Human-Robot Interaction, Social, Cognitive and Developmental Robotics, Assistive Technology and Artificial Life. Before she moved to Canada in 2018 she developed and coordinated the Adaptive Systems Research Group at University of Hertfordshire, United Kingdom, which she is still affiliated with. In 2019 she was elevated to IEEE Fellow for her contributions in Human-Robot Interaction and Social Robotics. She is life-long Fellow of AISB (The Society for the Study of Artificial Intelligence and Simulation of Behaviour) and one of the two Editors in Chief of the Journal Interaction Studies- Social Behaviour and Communication in Biological and Artificial Systems published by John Benjamins Publishing Company, Editorial Board Member of Adaptive Behavior, Sage Publications, Associate Editor of the International Journal of Social Robotics, published by Springer, and Associate Editor of IEEE Transactions on Cognitive and Developmental Systems. She is also an Editor of the book series Advances in Interaction Studies, published by John Benjamins Publishing Company.

Enter a brief, clearly worded question below and submit. Questions will be answered during the webcast in order of popularity and as time permits.

Be sure to visit the "Most Popular Questions" tab and vote.
* Required fields