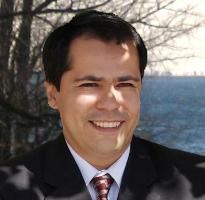 Carlos Saavedra received the B.Sc. degree in 1993 from the University of Virginia and the M.Sc. and Ph.D. degrees from Cornell University in 1995 and 1998, respectively, all in electrical engineering.  From 1998 to 2000 he was a Senior Engineer at Millitech Corporation in South Deerfield, Massachusetts, where he designed 28 GHz and 38 GHz transceiver modules for broadband wireless communication links.  In 2000 he joined the Department of Electrical and Computer Engineering (ECE) at Queen´s University, Kingston, Ontario, as an Assistant Professor and was promoted to the rank of Associate Professor in 2006 and to Professor in 2013.  He served as ECE Graduate Chair at Queen’s from 2007 to 2010 and has held visiting professorships at different universities while on sabbatical, most recently at the University of Navarra’s School of Engineering (Tecnun) in San Sebastián, Spain.

Dr. Saavedra is a Section Chair of the Natural Sciences and Engineering Research Council of Canada’s (NSERC) Discovery Grants Program Evaluation Group for Electrical and Computer Engineering.  He was Chair of the MTT-S Technical Coordinating Committee 22 on Signal Generation and Frequency Conversion from 2010 to 2013 and was guest editor of the September/October 2013 IEEE Microwave Magazine’s Focus Issue “100 Years of Mixer Technology”.  He was a member of the Steering Committee and of the Technical Program Committee (TPC) of the 2012 IEEE International Microwave Symposium (IMS) and continues to serve on the TPRC of the IMS.   He has served on the TPC of several other conferences, including the IEEE Radio-Frequency Integrated Circuits (RFIC) Symposium, the Asia-Pacific Microwave Conference and the IEEE International Microwave & RF Conference (IMaRC).   Professor Saavedra is the author or co-author of 100 peer-reviewed journal and conference papers in his field of research.  He is the recipient of an NSERC Discovery Accelerator Award for the period 2011-2014 and is a three-time recipient of the third-year ECE undergraduate teaching award at Queen’s University.